The village of Scopello 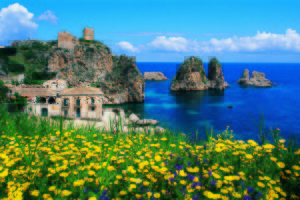 Scopello is an ancient fishing village and a popular seaside resort, famous for the stacks (formed after the extraordinary erosive action of the sea), similar to those of Capri , but marked by a strong rocky vegetation and by prickly pear that  cover their tops and on which gulls and shrill black jackdaws nest.

Scopello would rise on the site of the ancient city of Cetaria, named for the great abundance of tunas.

The Arabs, destroyed the city of Cetaria, restored the tuna trap and called the site “Iscubul Iakut”.

In 1220 Federico II gave it as a fief to the Martorana church in Palermo as compensation for the silver and gold that he had taken away to support the expenses  of war.

Afterwards the same Frederick II donated the village to a colony of Piacentini conducted by Oddone, and emigrants from Lombardy.

They abandoned it because it was an area too small and often attacked by pirates; consequently Federico II want it again.

Federico  III of Aragon gave it to the Cantore of I. R. Basilica Palatina of St. Peter, until it came into the hands of theprince of Pacco, Giacomo Fardella. In 1767, after the expulsion of the Jesuits, the part they owned went to the State, that  sold it, in 1871, to Mr. Florio and partners.